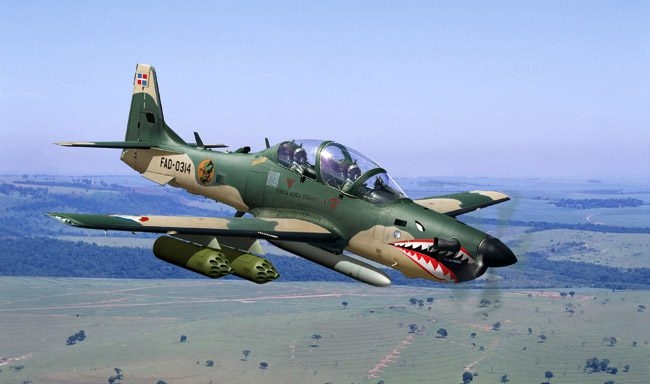 The Burkina Faso’s Armed Forces General Staff (EMGA) announced that airstrikes were carried out against militant bases near Pama and Gayeri in the east of the country on 15 September. They were part of a series of anti-terrorist operations that also involved sweeps by ground forces in these two areas.

This is the first time that the EMGA has officially acknowledged the use of offensive air power in military operations.

Three EMbraer EMB-314 Super Tucanos delivered to the FABF in 2011, were used in the attack.

The Embraer EMB-314 Super Tucano is primarily a trainer, it was also made to be a light-attack aircraft designed for counter-insurgency, close air support and aerial reconnaissance.

The MILDS F detects the incoming missiles, and the ALE-47 automatically releases the flare or chaff counter-measures accordingly.

The Cockpit, fuel system and engine components all have armor plates by TenCate.

The Super Tucano can fly up to 35,000 feet and can engage targets from 26,000 feet using the Hellfire or other Precision Guided missiles.

The aircraft is fast and agile. It can reach a maximum speed of 590 km/h.