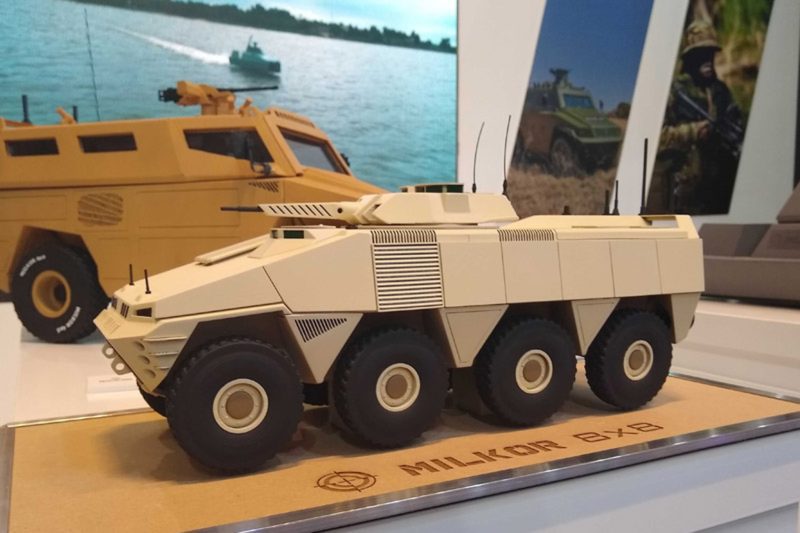 According to Armand Bodenstein, senior marketing manager at Milkor, ‘The drivetrain is where we see we can stand apart,’ As an ITAR-free product, it will be able to support a variety of weapons such as a 12.7 mm machinegun, 35 mm cannon and 40 mm grenade launcher.

A scale model of the new 8×8 was displayed for the first time at IDEX 2019. more details is expected to be made on the upcoming AAD 2020.

Big presence for Milkor at AAD 2022, as it expands domestic security offerings

In its long-term plan the company, Milkor is working on a new 6×6 armored vehicle whichdefense experts believe will see the company pitching against Paramount Group of South Africa with its family of Mbombe vehicles which have already had some export success.

Speaking on markets Bodenstein said that the company is looking to focus on growing and emerging markets in the Middle East, Africa, Latin America Asia-Pacific.

Milkor gained popularity at last year’s Africa Aerospace and Defence (AAD) 2018 exhibition held in Pretoria, where it was one of the biggest exhibitors.

Meanwhile, the company has other development plans in the works with its unmanned systems, of which there are three in its portfolio. Bodenstein said that there are plans for weaponisation of the two larger UAVs, the MA 380 and the MA 80, with small guided bombs.

Big presence for Milkor at AAD 2022, as it expands domestic security offerings