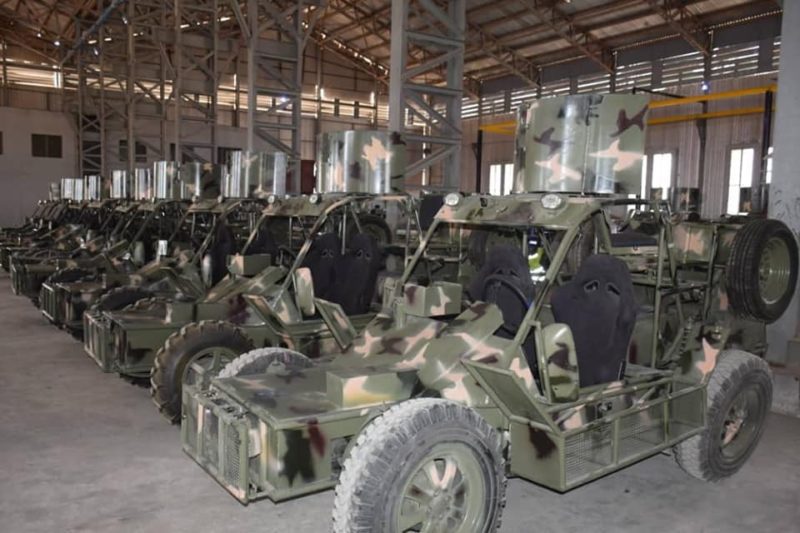 The IPV was displayed during the first Nigerian Army Research and Innovation Summit held in Abuja in February 2017, armed with 12.7 mm DsHK and 7.62 mm FN MAG machine guns and reportedly weighs 650 kg.

According to the COAS, the Nigerian Army had invested extensive research into developing the IPV to meet its requirements and that several had already been used in counter-insurgency operations in the northeast of the country.

“The Armoured Fighting Vehicles and other tactical and logistics vehicles commissioned today will be deployed to support ongoing operations in the North East and other parts of Nigeria,” he said.

During the launch, Buratai said that the Nigerian Army will start exporting combat vehicles to other African countries around 2030 after meeting Nigerian Army requirements around 2025.

“Today marked an indelible milestone in the history of the Nigerian Army’s march towards self-reliance in the production and maintenance of armoured fighting vehicles and other classes of vehicles as over the years the Nigerian Army has relied on importation of such vehicles, thereby spending huge foreign exchange which in turn depletes capital allocations”, said the Managing Director/Chief Executive Officer of NAVMC, Major General VO Ezugwu.

In recent time, The Nigerian military has acquired armoured vehicles from other domestic manufacturers such as the Proforce Ara (Thunder) Mine -Resistance and Protection (MRAP) vehicle produced in conjunction with the Defence Industries Corporation of Nigeria (DICON).

The Nigerian Army engineers Corp known to be innovative and creative in the face of overwhelming obstacle came up with the IPV to tackle the high-speed high-mobility engagement they usually encounter in the arid desert of the north eastern Nigeria. The IPV primary roles includes;

US approves command and control (C2) system for Morocco