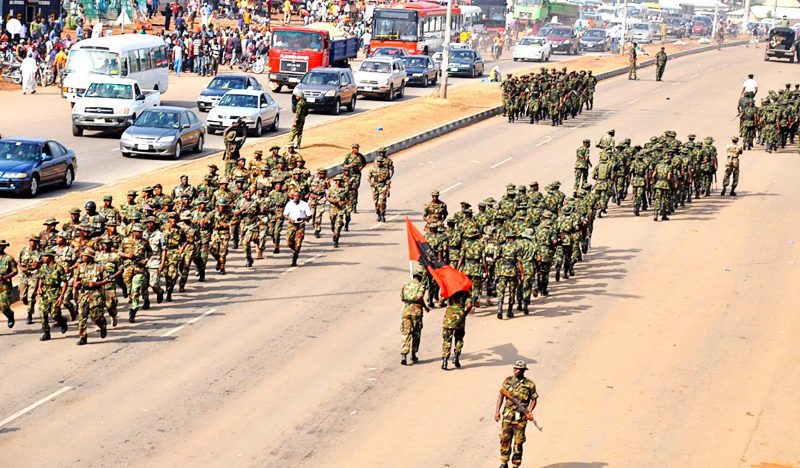 Although, they said it is strategic withdrawal, but they have left a vacuum where our people are at the receiving end.

With the decade old war in Nigeria’s Northeastern region showing no sign of abating soon, the Nigerian Army recently adopted a new strategy. This new strategy named “Super Camp” involves the clustering of front-line soldiers in well-defended citadels near cities.

Soldiers in this citadels or Super Camps will still retain the ability to respond swiftly to threats across the region. The shift to this new strategy is as a result of continuous reports of insurgents (Islamic State and Boko Haram) overrunning small troop locations in the Northeast, using numerical strength.

In 2009, Boko Haram launched an insurgency to install its own version of religion in an Islamic caliphate. Boko Haram which means “Western education is forbidden”, held Nigerian territory the size of Belgium in 2014, although, it was recaptured by the Multinational Joint Task Force (MJTF), a multinational military force comprising of Nigeria, Niger, Chad, Cameroon and Benin.

Following relentless onslaught by the Nigerian military as well as the MJTF, the group split in 2016, giving birth to the Islamic State in West Africa (ISWA). The resulting decade of war has killed more than 30,000 civilians and displaced millions.

According to the United Nations, the conflict is one of the worst humanitarian crises gulping millions of dollars.

So far, the Nigerian Army led by General TY Buratai emphasize that from this super camps, it forces will be able to conduct rapid and decisive attacks against insurgents while retaining its various component’s combat integrity.

This, the Nigerian Army believes is the “final phase of routing out Boko Haram” for good.

In the past, however, ISWA and Boko Haram has been able to ambush military patrols, small lightly protected troops location. Hence, Super Camps appears to be a redesigned “fortress strategy,” first announced in 2017 but was never implemented.

According to a military expert who focuses on Wars in the Sahel, the Super Camp strategy involves two critical components.

The conventional offensive actions involves engaging the insurgents as if they are a near-peer adversary while the Asymmetrical warfare strategy involves various counter-terrorism activities like ambush, raids, sabotage and other covert operations.

So far, twenty Super Camps have been established in the Northeast with various platforms being deployed alongside. A super camp can house as much as two hundred soldiers provided with basic facilities.

Since the commencement of the super camps, soldiers tasked to protect critical infrastructures and some key roads, have been redeployed, thereby creating an immediate vacuum, a development which terror groups have taken advantage of.

While the military may have reduced the potential for casualties and theft of military materials, which seems to be the real reason behind Super Camps, it has also reduced its ability to combat ISWA in rural areas.

With insurgents now roaming freely, contact between soldiers and the insurgents are less likely, and therefore fewer deaths. However, politically, it appears that control of some part of Borno state have been temporarily ceded to ISWA.

Echoing this concerns, Zanna Boguma of Borno, an elite in the region noted that removing troops from static positions will only leave citizens to the mercy of the terrorists.

“Although, they said it is strategic withdrawal, but they have left a vacuum where our people are at the receiving end.

He believes that ISWA will utilize this opportunity to train new recruits, generate more tax and become more powerful, at which point it may be capable of attacking “super camps” and threatening major urban areas.

He opined that, Super Camps without military formations on the strategic roads is very daring and dangerous.