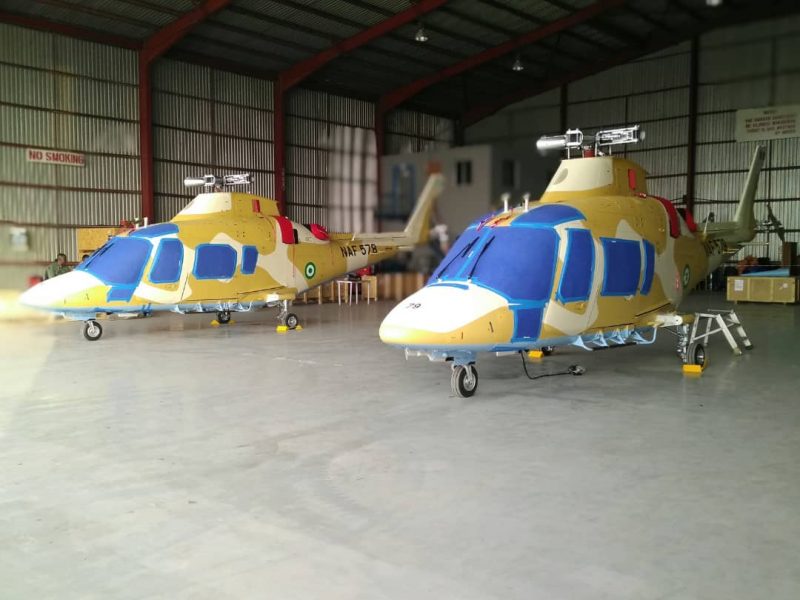 Note: this article has been updated with new information and images.

The Nigerian Air Force has taken delivery of two Leonardo A-109 Light Utility Helicopters to support the ongoing fight against insurgency and banditry in the country.

Both helicopters arrived Nigeria on Wednesday, 15 January, according to the Chief of Air Staff, Air Marshal Sadique Abubakar who disclosed this during a media briefing at the Presidential Villa, Abuja, on Friday, 17 January.

Abubakar said that, “In terms of procurement of platforms, substantial number of these equipment are expected by the end of February, some of the equipment we are acquiring have started arriving.”

“For the Nigerian Air Force, two helicopter gunships arrived on the Jan. 15 and we are now in the process of putting them together to add to whatever we have already.”

The two Leonardo A-109 Light Utility Helicopters was supplied to the nation’s armed forces to enhance their capacity in the battle fields and will be deployed to complement the air power in various operations across the country.

They were received by a NAF Team, led by Air Commodore Halim Adebowale, as well as the Country Representative of Leonardo Helicopters, manufacturers of the aircraft. NAF engineers and technicians, in collaboration with a Team from Leonardo, have commenced assembly of the helicopters preparatory to their induction into service.

The Nigerian Air Force is currently involved in several internal security operations to deal with terrorism, banditry and other forms of insecurity in the country.

In December 2018, The Nigerian Air Force placed an order for six Leonardo AW109 helicopters, they are the AW109M, the militarised version of the AW109E that can be armed with heavy machine gun pods and 70 mm rocket launchers.

AW109 Power can be configured for a range of missions, including search and rescue, law enforcement, air ambulance, coast guard, border patrol and surveillance.

However, in July 2017, a Nigerian Air Force Agusta 109 helicopter was brought down on a body of water by the crew in Borno state after it developed a ‘technical glitch’. The helicopter suffered major structural damages.

Also, the NAF lost an AgustaWestland AW-109 light utility and transport helicopter on Thursday 14 November, 2019 at its base in Enugu.

The AgustaWestland AW-109 helicopter crashed after a routine flight, there was no casualty.

In June, 12 2019, an unspecified helicopter crash-landed on Nigeria’s Democracy Day during a routine aerial patrol in Kastina.

The helicopter crashed in the process of landing while returning from an anti-banditry combat mission in the Northwest, when it crashed at the Umaru Musa Yar’adua Airport.