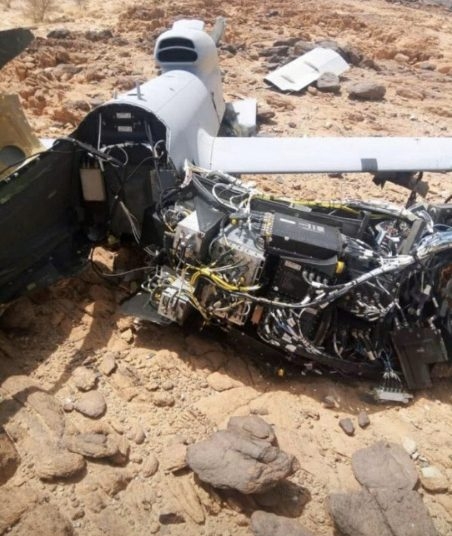 A United States military MQ-1C Gray Eagle drone operating under the banner of the U.S. Africa Command (AFRICOM) has crashed in Agadez, Niger on 29 February.

The MQ-1C Gray Eagle drone was lost after suffering a mechanical failure, according to a March 2 statement by AFRICOM via its Twitter handle.

Although, the statement released by AFRICOM did not specify the type of remotely piloted vehicle (RPV) that crashed nor provided much details regarding the circumstances of the crash, however, photographs published on social media by Nigerien locals clearly shows the wreckage of an MQ-1C Gray Eagle drone currently in service with the U.S. Army.

Beside the MQ-1C Gray Eagle wreckage, an unused Hellfire missile lies, where it apparently detached from the drone wing mount during the crash. If unrecovered by the U.S, French or Nigerien forces could be used as an improvised explosive device by the Islamic terror group operating in the country.

For several years now, the United States and the Nigerien government has an agreement that allows US station and operate armed drones to improves the ability to respond to threats and other security issues in the region.

In line with that agreement, the U.S. military last year began flying drone missions for intelligence, surveillance, and reconnaissance (ISR) operations out of Nigerien Air Base 201, located around 5 km southeast of Agadez.

“The ISR operations are to be conducted in support of partner forces and international efforts to counter violent extremist organizations in the region. This effort is in partnership with the Nigerien Government and reflects the commitment and desires of African partners as well as common interests for stability and security in the region”, said AFRICOM.

The General Atomics MQ-1C Gray Eagle was designed for the United States Army as an upgrade to the MQ-1 Reaper drone. The Gray Eagle  is a Diesel piston engine that burns jet fuel, thereby improving its performance at high altitudes. It can operate for 36 hours at altitudes up to 25,000 feet (7,600 m), with an operating range of 200 nautical miles (400 km).

For a long time, the U.S. military has been flying armed MQ-9 Reaper drones out of Niger’s capital of Niamey, because of the need to increase the drone’s operational reach for better Intelligence, surveillance and reconnaissance missions across the region even as far as deep into Libya, a decision was made to set up a new site in the north in Agadez.

In recent times in Africa, there have been a string of drones losses, especially in Libya where both the U.S and Italy recently lost MQ-9 Predator B and MQ-9 A Predator armed drones respectively.

Also, several Turkish and Chinese-made drones operating in Libya have suffered losses in what experts now believes is an emerging drone war.