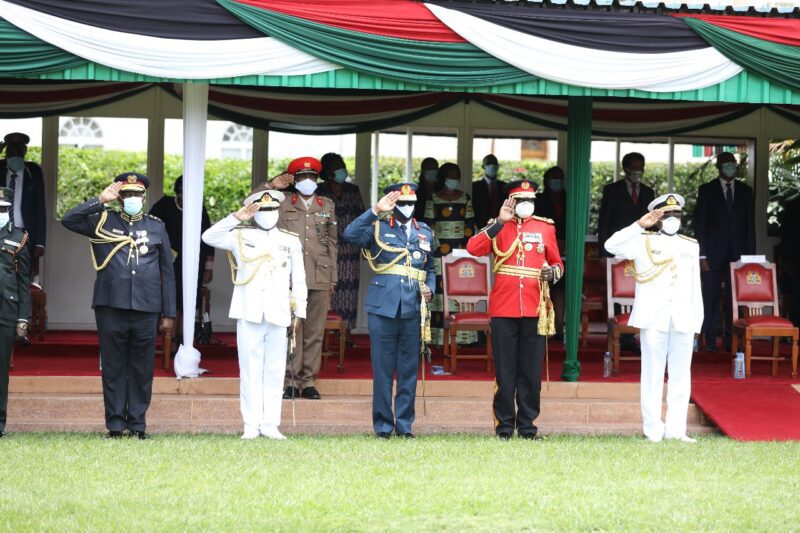 As the coronavirus crisis deepens across Africa the Kenya defence forces has taken a new turn to combat the virus. The KDF whose secondary mandate is to support civil authority in situation of emergency and disaster has proved that eastern lions and lioness are equal to task. The success is greatly attributed to dedication and professionalism that Kenyan Men and Women in uniform hold.

Immediately the first case of Corona was reported in Kenya, the able military through the military spokesperson and media sensitized the military personnel as well as the general public. The military distributed and aired various documentary adverts across the social media platform and main website.

The Kenya military melted hearts of many Kenyans when it saluted the Covid 19 frontline soldiers in a historical fly past medics with a banner God bless medics. The military further flew past the city with banner captioned “Stay home”. The military assured medics full support.

Disinfecting of military establishments and its environs

The Kenya Defence Forces stepped up fight against the Covid 19 by disinfecting military establishments and surrounding areas. This program saw informal settlements, CBD and other government and private installation being disinfected. The towns close to military barracks benefited in this initiative.

The officers in operation were not left behind and to inhibit the spread of Corona Virus the soldiers in Somalia, disinfected Jubaland State House in Kismayu among other key areas that fall under the KDF’s area of operation. The military further conducted Covid 19 awareness locals on exercise nicknamed #JoojiKorona meaning #Stopcorona.

During the Swearing in of the new chief of Defence forces of Kenya ,Gen Robert Kibochi, the outgoing Chief of Defence forces Gen (RTD) Samson Mwathethe surprised the commander-in-chief President Uhuru Kenyatta and other Kenyans when he presented a cheque of one hundred two million, one hundred nine thousand, three hundred fifteen Kenya shillings credited to Covid 19 Emergency Response Fund. This is approximately nine hundred, thirty thousand US Dollars.

The members of KDF took a voluntary pay cut of their salaries to aid government combat the pandemic. The president had earlier on brought to board and activated National Management Response committee to deal with the pandemic.

Kenya Defence Forces medical team has since been conducting Covid-19 mass testing at the Defence Headquarters.  Testing is also on going in several barracks in Nairobi as a preventive measure to curb the spread of the disease. The medical centres offer an opportunity for KDF Officers, Soldiers, military families and Ministry of Defence civilian staff to be tested.

Distribution of food and water

KDF Soldiers distributed foodstuff as Zakat al Fitr in Dhobley town and also in areas of Lakoley and Banjoun towns of Kismayu, Somalia. The Kenya Navy who are based in coastal area of Kenya distributed food to the residents of Likoni which is within Kenya Navy area of influence.

KDF Engineers Brigade supported Kenyatta National Hospital’s infectious disease unit (IDU) to prepare grounds on which the Covid 19 patient isolation centre will be expanded. The works involve ground excavation, murram filling, leveling and compacting. The military has been seen being in solidarity with medical team in war against Covid 19.

In performing other military duties mandated by the state, the military organized an invite only national Madaraka day celebration at state house. Madaraka day is celebrated in Kenya to mark Independence Day. It is usually done stadiums across the country on a rotation based but due to the current pandemic the celebration were held within statehouse.

The participants observed public health guidelines by maintaining social distance and wearing mask. At the entry to statehouse the guests were sanitized and had their body temperature checked by the health specialists. Other Kenyans were forced to follow the event from their television and Radios.

The Kenya military has stand out among peers and lead the pack to combat the eastern virus as observed by Barry.