Fire for fire: LNA launches anti-ship missile in show of force against Turkey 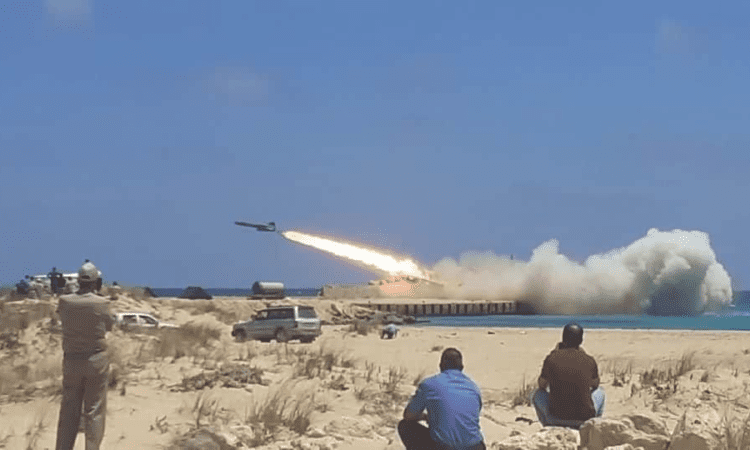 Coastal defense unit of the Libyan National Army on Saturday 18, launched a P-15 Termit anti-ship missile near Zawiyat Zanzur, Tobruk in response to Turkey’s planned troops deployment in the country.

The P-15 Termit also known as SS-N-2 “Styx” was fired into the Mediterranean Sea, from a makeshift launcher. Although, the missile nose-dived less than a kilometer from the launch point, indicating that it lacked any active guidance system in place.

The P-16 Termit (SS-N-2 “Styx”) anti-ship missile is a surface-to-surface anti-ship cruise missile that can be launched from a ship or a coastal battery. The design was based on the experimental Yak-1000 fighter built by the Soviets in 1951. The P-15 was meant to be a cost-effective weapon. The P-15 Termit (SS-N-2 Styx) was exported to many countries by the Soviet Union and thus has seen extended use in combat. The missile has a range of 80km Maximum and a Speed of Mach 0.95.

The missile launch is in response to President Recep Tayyip Erdogan statement that Turkish troops have begun moving into Libya after parliament approved the move last week. “Our soldiers’ duty there is co-ordination. They will develop the operation centre there. Our soldiers are gradually going right now,” President Erdogan told the CNN Turk TV channel.

He said Turkey’s objective was “not to fight” but “to support the legitimate government and avoid a humanitarian tragedy”.

On the land side, The GNA on Saturday, 18 July dispatched several military vehicles Saturday to the west of Sirte province under Operation Paths to Victory to liberate the central city of Sirte and Jufra from Khalifa Haftar’s militias.

“We will enter Sirte. This isn’t a battle for cities like Tripoli or Sirte. It is a fight for Libya, for freedom and democracy,” Abdelmenaam al-Draa, a military spokesman said. “We will continue east until we liberate all of Libya from the war criminal Haftar.”

Warlord Haftar, who is backed by France, Russia’s Wagner Group, the UAE and Egypt has been steadily losing grounds since this year, owing to Turkey’s extensive use of Bayraktar TB2 drones and electronic warfare tactics.

Turkey which has entrenched itself in the Libyan crises wants to secure a greater role for itself in the planned exploration for natural resources in the Mediterranean, and is seeking to eliminate Haftar from Libya’s political scene.

With Turkish intervention to support Libya’s Government of National Accord (GNA) unwavering, Russia a major Haftar’s ally has increased its involvement by deploying several combat aircraft including MiGs for a planned “massive aerial offensive.”

Driven by Turkey’s desire to secure its energy supplies and extend its access to Mediterranean gas fields, it support for the GNA has been growing, with supply of drones like the now proven Bayraktar TB2 combat drone as well as hundreds of Syrian mercenaries.

At the moment, Haftar’s forces are garrisoned at Sirte, ## kilometre from Tripoli the capital and hometown of the late Muammar Ghadafi, waiting defensively as the GNA prepares to storm the city.

Turkish naval warships have been a constant presence off the Libyan coast since President Recep Tayyip Erdogan sided with the U.N.-recognized Libyan government in Tripoli. Weapons like SCUD-Bs, P-15 Termit anti-ship missiles have already been seen heading towards the frontlines.

This isn’t the first Haftar’s forces are threatening Turkey’s assets in the Mediterranean Sea, earlier in 28 June 2019, the spokesman of the Eastern Libyan forces, Ahmed Mismari said that Commander Khalifa Haftar will ban any commercial flights from Libya to Turkey and that any aircraft or ship arriving from Turkey attempting to land or berth in the capital Tripoli would be treated as hostile.

In February 18, the Libyan National Army attacked a Turkish ship in Tripoli’s Seaport, suspected to be bearing weapons for the Government of National Accord (GNA). The ships were attacked with surface-to-surface rockets on 18 February.

Turkey apparently retaliated in April, when a one of its G-class frigate sailing off coast of Sabratha 55 km west of Tripoli, the Libyan capital reportedly fired at least one RIM-66E-05 Standard surface-to-air missile, supposedly against a Libyan National Army (LNA) UAV. However, the RIM-66 Standard missile apparently missed and landed near al-Ajaylat, just southwest of Sabratha.

Turkish ships are known to give Electronic Warfare and long-range targeting support to Turkish drones attacking Haftar and destroyed Russian Pantsir air defense systems backing him. Moreover, Turkey’s ex-Oliver Hazard Perry-class vessels it acquired second-hand from the U.S. Navy have been a constant visitor in the region. The flotilla has been tracked several times in the Mediterranean Sea by OSINT.

The Libyan war have become a continuation of the proxy wars witnessed in Syria. Both Turkey and Russia have flown in Syrian militias, with the Russian mercenaries from an organization known as the Wagner Group, run by Yevgeny Prigozhin, a close associate of President Putin. The Wagner fighters have also been used in Syria.

Libya and INTERPOL: prospects for cooperation on border control