Nigeria: 78% of frontline F-7 aircraft fleet in China for maintenance 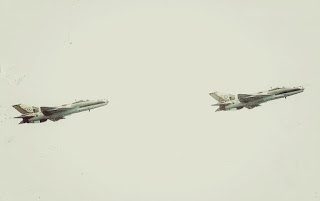 Maintenance is an essential component in keeping an aircraft flight-worthy, thus, 7 out of nine available F-7 fighter jets have been sent to China for deep maintenance says the Chief of Air staff, Sadique Abubakar.

Likewise, Periodic Depot Maintenance (PDM) on 2 Alpha Jets is currently ongoing in Kainji, Life Extension Program (LEP) of three L-39ZA Albatross aircraft at the 403 Flying Training School (403 FTS), Nigerian Air Force (NAF) Base Kano would be completed to boost the efforts in ensuring that the country is secured”, he said.

The LEP, which involves in-depth inspection of main and crucial components of the airframe, engine, avionics and escape system of the aircraft, is being executed by the Original Equipment Manufacturer (OEM) of the aircraft, Messrs Aerovodochody of Czech Republic, with support from NAF engineers and technicians.

While two of the F-7s are being reactivated in-country, “7 aircraft, which require high level, in-depth maintenance by the Original Equipment Manufacturer, were being airfreighted to China due to the unavailability of all the necessary maintenance and test equipment within Nigeria.”

With only two F-7 aircraft left in Nigeria at the moment, and the other seven representing more than 70 percent of the entire air defence fleet, they are expected to be replaced or complemented by at least three new JF-17 Thunder multirole aircraft to be delivered in November by Pakistan.

The F-7 AirGuard is a license-built version of the Soviet Mikoyan-Gurevich MiG-21 marketed as an interceptor, in several air forces. In early 2008, Nigeria procured 12 F-7NI fighter jets and three FT-7NI jet trainers to replace the existing fleet of MiG-21 aircraft. The first batch of F-7s arrived in December 2009.