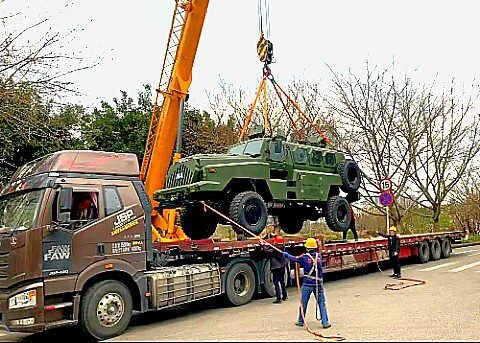 According to Chinese sources, additional batch of the CS/VP3 Bigfoot MRAPs have been manufactured by the Chinese automobile company China Chang’an Automobile Group Company (Chongqing), and is ready to be shipped to Nigeria on or before March 2021.

This latest batch will add to the already large plethora of Chinese military equipment paid for by special funds and delivered to Nigeria over the past few years.

Nigeria which is currently battling terrorism, armed banditry, and other security crises is ramping up its military capabilities to better deal with the issue.

In Nigeria, Poly Technologies’ Bigfoot MRAP has somewhat earned a positive reputation for its reliability and troops protection capability against small arms, light weapons and improvised explosives prevalent in the troubled region.

At least a dozen CS/VP3 Bigfoot have been reported captured or destroyed by terrorist’s IED in Nigeria however, despite severe damage to the vehicle, personnel usually come out unscathed.

Although significantly cheaper than its American or European counterparts, the CS/VP3 offers comparable protection, which is why the Nigerian Army still fields it despite operating several MRAPs sourced from South Africa, the United States, as well as indigenous designs.

The CS/VP3 is in service with the police of Nigeria and Uganda.