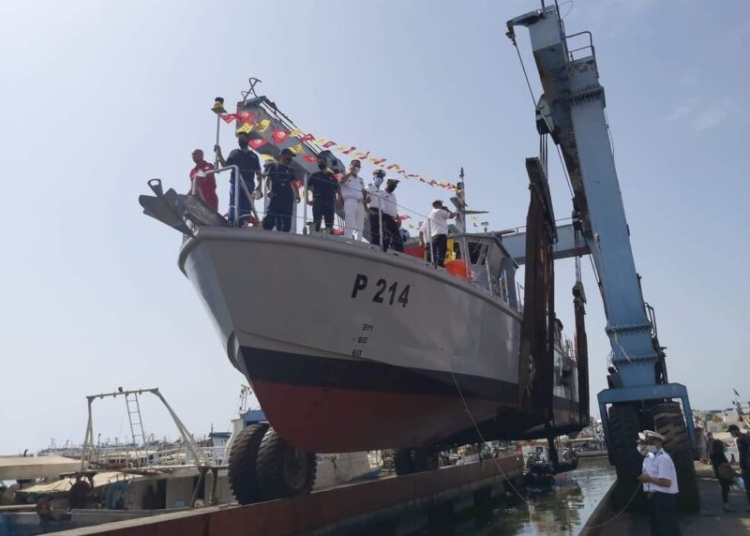 Tunisia has launched the fifth Istiklal 27.5 meter patrol boat ‘Douga P214’ for its Navy.
The Tunisian-made boat was launched yesterday in Sfax, and is the fifth out of a seven-strong fleet planned to be constructed.

During the launch ceremony, the Tunisian Minister of National Defense, Mr. Ibrahim El-Bertagy, was in attendance.

Ibrahim El-Bertagy expressed his hope that this cooperation between the Ministry of National Defense and “SCIN” company will rise to its highest levels by continuing to work on creating benefiting technology for the public and private sectors.

He also called on the concerned structures from the public and private sectors to engage in the field of military industrialization as it is an engine of growth and a tributary. One of the tributaries of national security in its various economic, social and security dimensions.

During the occasion, he authorized the production of a 50-meter patrol ship named Kairouan (PSM 401).

Armed with a remotely operated cannon/heavy machinegun, it will have a length of 51 metres and maximum speed of 20 knots, with a cruising speed of 15 knots. Range will be approximately 2 000 nautical miles.

The fourth boat P213 ‘El Jem’ was launched in April this year.

Its maximum speed is 26 knots, with a range of 600 miles. The Istiklal class boats are manned by 18 personnel including three officers. The type is armed with one 20 mm gun and two 12.7 mm machine guns.

They will operate alongside twenty-six US-made patrol boats in the Tunisian Navy delivered between 2012-2019.