Here is a comprehensive guide on South African made weapons and military hardware.

During the apartheid era some years back, when South Africa was under a United Nation (UN) sanctions, the then government led by President Frederik Willem de Klerk was forced to adopt measures to keep his military relevant in the modern world. Under a severe arms embargo placed on South Africa, the nation had to look inwards. It then set-up a modest military Research and Development (R&D) corporation Armscorp which morphed into the present day Denel Systems. Major defence equipment developing corporation.

South Africans are behind many global innovations, including the world’s first heart transplant, the Kreepy Krauley, Pratley Putty, and Dolosse.

The country has also produced many internationally-renowned technology entrepreneurs, like Elon Musk, Mark Shuttleworth, and Roelof Botha.
This continued innovation in South Africa was shown in the 2015 Innovation Prize for Africa award nominations. That year, the African Innovation Foundation received 925 applications from 41 countries for its IPA awards. Four of the ten IPA 2015 finalists were South African.
Over the years the South African National Defence Force (SANDF) equipment inventory has been given a needed boost. The public-private partnership policy that the government is following has bolstered the SANDF combat-readiness and is since yielding results.

Although Denel appears to be homegrown it has a checkered history of bribery, back-channel acquisition and theft of technology.
Denel has acquired A-Lister position in the prestigious clique of advanced combat systems producing countries rivalling great nations such as U.S.A, Germany, Russia, France, U.K, Isreal just to mention a few.

Developed out of the white apartheid regime desire to keep the South African Blacks under military repression, the South African arms industry is considered one of the most advanced in the non-Western world today, on par with fellow IBSA partners, India and Brazil.

Although weapons production has slowed considerably since the official end of apartheid, Pieter Wezeman, Senior Researcher, Arms Transfers Program at the Stockholm International Peace Research Institute, had this to say

The South African arms industry has advanced in a few niche areas such as certain light armored vehicles and anti-tank missiles. The country’s combat systems and other military equipment are in high demand in many countries throughout the world, from the United States to China, and from Sweden to Zambia.

The NTW-20 is an anti-material rifle, used to engage high-value targets such as radar stations, petrol tankers, static helicopters and planes, and command and control stations.
It serves as an accurate long-range portable rifle which can be carried by a sniper and can also be mounted on light vehicles.
While it is not seen as a traditional sniper rifle, a version of this gun (Denel NTW-14.5) is credited with a 2,125m kill by a South African Special Forces sniper.

Many of South Africa’s best innovations happened in the military. The country’s achievements include building one of the world’s best attack helicopters and becoming a nuclear state.

Ivor Ichikowitz, founder and executive chairman of Paramount Group, said South Africa is producing top-class military equipment and technologies.
He further said the country can hold its own against the best the world has to offer, and that it is an industry which shows what South Africa can do.

Here are some of the military weapons built in South Africa.

The Denel Rooivalk is an attack helicopter which was developed by the Atlas Aircraft Corporation, a predecessor of Denel Aviation, and manufactured by Denel.
The Rooivalk sports two staggered cockpits and two turbine engines, and the main and rotor blades can withstand hits from small arms fire.
The Rooivalk’s attack helicopter platform can deliver a variety of hard-hitting projectiles against targets several kilometres away. 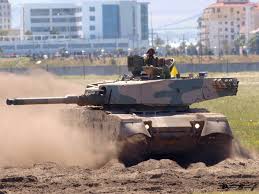 The Olifant is the South African Army official tank.

The Olifant mk1B main battle tank was developed and produced by the Olifant Manufacturing Company, OMC Engineering Pty Ltd, based in South Africa. Development of the Olifant started in 1976 and first entered service with the South African Armoured Corps in the late 1970s.
OMC Engineering later became Reumech OMC, then Vickers OMC and, in September 2002 was renamed Alvis OMC, following the acquisition of Vickers Defence by Alvis plc. In September 2004, Alvis OMC became part of BAE Systems Land Systems.

The Ratel IFV was built to counter Soviet armour during the South African border war. It destroyed T-54/55 tanks used by Cuba forces.

The Mbombe is an agile infantry fighting vehicle offering protection, mobility, and fire-power. It is designed to provide protection against landmines, IEDs, side blasts, and RPG attacks.
This is achieved, in part, by new technology that provides mine protection without resorting to the traditional V-shape design.
The mine protected flat bottom hull reduces Mbombe’s silhouette to under 2.4 meters, which delivers benefits in combat and against IED attacks. The vehicle comes as standard with a high level of protection against kinetic energy and blast attacks.

The G5 towed howitzer is built by Denel and is a proven, reliable, and accurate 155mm long-range gun with an auxiliary power unit.
Denel said continuous feedback to design engineers from military operations and intensive testing under all possible conditions has resulted in a gun that is “not only immensely practical but also extremely reliable and user-friendly”.

The G6 is a 155mm self-propelled gun-howitzer developed by Denel. The G6 is a battle proven, highly mobile, fully protected, wheeled, a self-propelled gun with a firing range of more than 50km.
Denel states that while the G6 continues to outgun competitive artillery systems, it has developed the new G6-52 which has advances in all the capabilities critical to effective artillery.

The Seeker 400 UAS is a self-contained system which has a large payload carrying capability, high-definition video imagery, real-time data acquisition, transmission to remote receivers, and autonomous take-off and landing capabilities.
The Seeker 400 operates at direct line-of-sight ranges of up to 250 km from the base station and provides real-time day and night reconnaissance, target location and designation, and artillery fire support.

The Advanced High-Performance Reconnaissance Light Aircraft (AHRLAC) is a South African-designed and developed aircraft, destined for a role in a wide range of civilian and military tasks.
There’s even a special review of the AHRLAC right here on Military Africa.
Developed by Paramount Group, the AHRLAC hopes to challenge Western manufacturers with its multi-role applications, low cost, reduced requirement for maintenance support, and extensive operational capabilities.

Davit system by the CSIR

To counter-piracy, the CSIR has developed a Davit system that deploys small boats from navy vessels in motion which enables the South African Navy to act quickly against pirates.
The Davit System is removable and can be loaded onto any ship’s deck with a suitable container footprint. It has a wave-compensating hydraulic system mounted on a load vector compensating base, which ensures that forces are evenly distributed into the deck.
The system also carries stored energy which means the reaction vessels can be deployed even if the ship cannot provide the required power.

Other decommissioned South African made weapons

During the seventies and eighties, South Africa built many world-class military military systems, including the Cheetah fighter and nuclear devices.

During the seventies South Africa was one of only a few nations which developed and built nuclear devices.
According to an article by Marcus Duvenhage, South Africa had six nuclear devices and was busy constructing a seventh before it abandoned its nuclear program.
While South Africa denied being a nuclear state during the apartheid years, former president FW de Klerk confirmed in March 1993 that South Africa had “embarked on the development of a limited nuclear deterrent”.

The Mokopa is a South African air-to-ground missile, designed primarily for use as an Anti-Tank Guided Missile (ATGM). It is currently in its final stages of development, and is being integrated onto the South African Air Force’s Rooivalk attack helicopters.
The missile is produced by Denel Dynamics, formerly Kentron. The current version utilises Semi-Active Laser (SAL) guidance, requiring the target to be illuminated by a laser designator either on the launch platform or elsewhere; though there are alternative guidance packages available including a millimetre-wave radar (MMW) seeker and a two-colour imaging infrared (IIR) seeker.

The ZT3 and its launch system were developed under the codename “Project Raleigh” in the 1980s as a “long-range indigenous antitank guided missile”.
The missile was developed in order to provide the South African Army’s Mechanized infantry vehicles, such as the Ratel IFV, with anti-tank capabilities and to supplement the ageing MILAN missile system that was in service at the time.
Pre-production models, mounted in a triple launcher on top of a Ratel IFV, saw service in Operation Moduler during the South African Border War with good effect

Parabot was unveiled at the African Aerospace and Defence Expo on September 16, 2014, at the Waterkloof Air Force Base in Pretoria, South Africa. The giant was designed by Paramount Group to raise awareness about rhino poachers.

According to the makers (Paramount group), Parabot stands as a symbol representing the resistance and resilience of the African people to fight back against the killing of our wildlife and heritage. It also stands as a message to the poachers that Africa would never give up on the fight.

More on this topic

In search of the next big thing

MINUSMA deploys Multi-Mission Hemispheric Radar (MHR) to protect its base